Registration for this event is now closed.
Email Anna Wood at awood@ccala.org with any questions about registration. 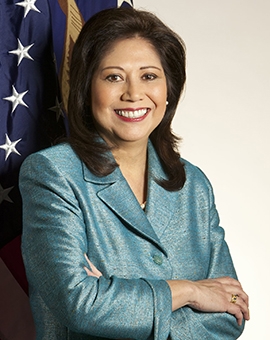 Supervisor Hilda L. Solis was sworn in as Los Angeles County Supervisor for the First District of Los Angeles County on December 1, 2014. She was re-elected to a new four-year term in 2018. As County Supervisor, Solis’ priorities include combatting homelessness and building affordable housing, expanding County services to all residents, environmental justice, good-paying jobs, health care access, criminal justice reform, improving parks and open space, and ensuring arts equity for all. Prior to becoming Supervisor, Solis served as Secretary of Labor under President Barack Obama. Supervisor Solis was confirmed on February 24, 2009, becoming the first Latina to serve in the United States Cabinet. Before that, Supervisor Solis represented the 32nd Congressional District in California, a position she held from 2001 to 2009.

PARKING:
Parking is available underneath the FIDM building at 9th Street just before Grand Avenue (This is an independent parking garage and the rate is $5 per day, validation is not available.) Additional parking is available at surrounding parking lots and parking meters.

28th ANNUAL ART OF MOTION PICTURE COSTUME DESIGN EXHIBIT:
The FIDM Museum’s costume exhibition grows every year to showcase the very best of film design. Join us as we explore the craft of costume design and celebrate the talented artisans who bring movie characters to life. Expect fan favorites alongside Academy Award® nominees from a variety of genres, as well as the return of Ruth Carter’s groundbreaking and Oscar-winning Black Panther costumes.

Tickets not currently available for this event  Member Registration