City budgets across the nation have become an important component in the dialogue about how communities operate. We are pleased that more people are getting involved in the details of city budgets and interested in how they are created. Budgets reflect a city's commitments to its employees and priorities to the communities it serves. It is important to know where public money is being allocated. We also know that with more eyes than ever looking at these complex documents, there is a lot of different and conflicting information being shared. We thought it would be helpful to take our members through the basics of how the City of LA's budget process works and share some of the important numbers.

What is a city budget?
A city budget is an estimate of the revenues and expenditures for the fiscal year. LA's fiscal year is from July 1 through June 30. The budget serves as the financial plan for the year and showcases commitments, priorities and goals. It is reviewed and changed throughout the year to reflect actual revenues and expenditures and is adjusted as needed. Status updates are made through Financial Status Reports.

How does a budget get created and adopted?
The City starts planning for the next fiscal year's budget at the start of the calendar year. Many of the steps and deadlines are required by the City Charter. Below, we outline a timeline of how the budget traditionally moves from requests to a Proposed Budget to an Adopted Budget. Usually the City Council makes changes to the Mayor's Proposed Budget before June 1; however, the FY 20-21 budget process is atypical because of the COVID-19 crisis and many unknowns. This year, the City Council did not adopt a revised budget and agreed to continue to amend the budget even after it goes into effect on July 1.

How can the public engage and provide comments?
The City Budget is an ongoing process and advocacy never ends. Especially in years like FY 2020-2021 where we'll see huge financial impacts from the COVID-19 crisis, the City will be closely monitoring revenues and making adjustments on an ongoing basis. There are always opportunities to engage with our elected officials and provide feedback, but here are a few key moments:

What is in the budget?
It is important to know the various funds that make up the budget so that we know what changes are possible and how to accurately make comparisons. We know data is used to support narratives so it is critical to understand the numbers. 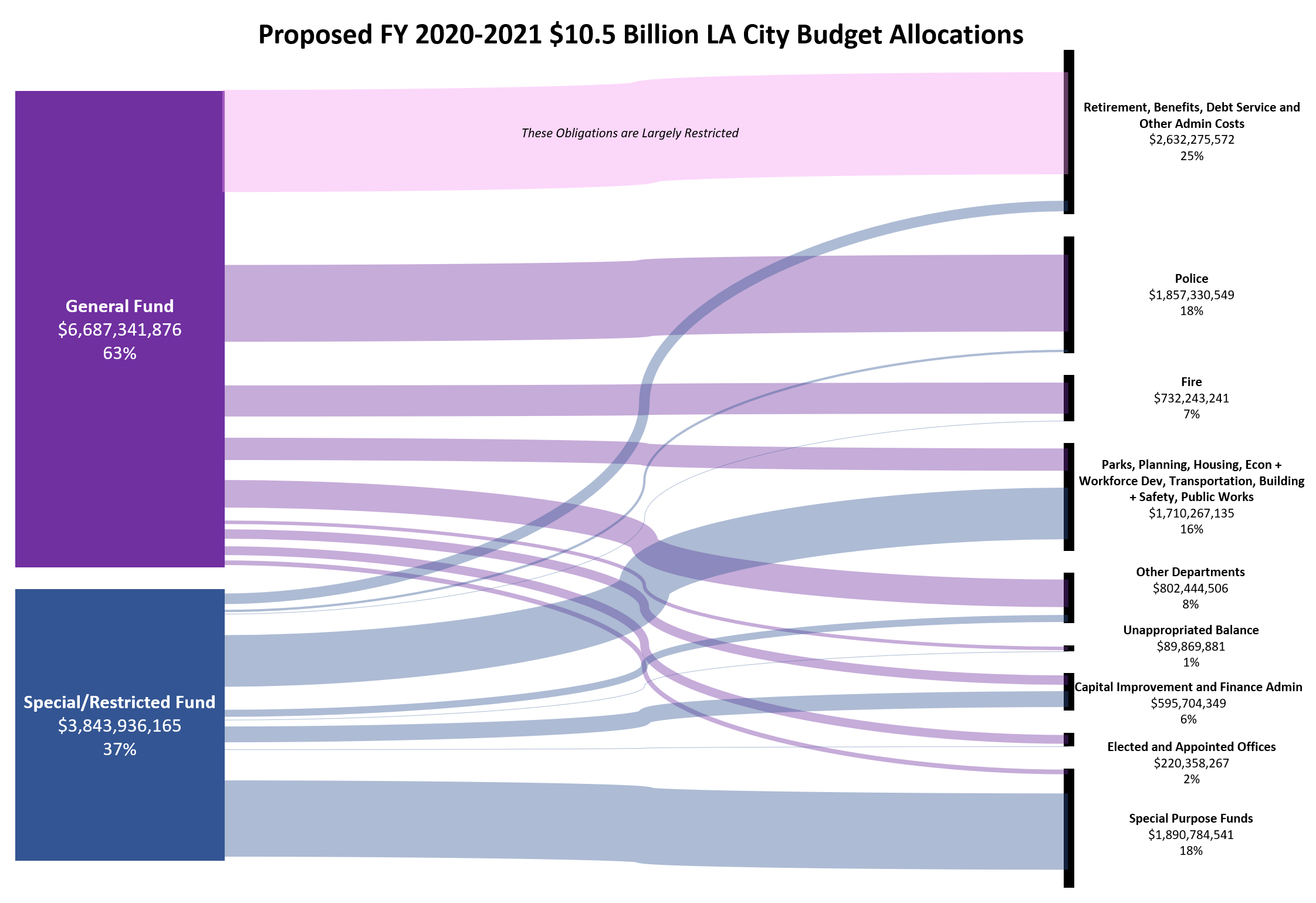 The budget is made of the General Fund, Special Fund, Reserve Fund and Budget Stabilization Fund.

General Fund: This is the primary operating fund of the city and is what the Council and the Mayor have primary discretion to control. While the Council and Mayor have substantial discretion over this fund, a share of it is used to pay for various obligations like pensions, retirement, employee benefits and debt service that cannot be easily or quickly reallocated. It is derived from sources such as taxes, licenses, permits, fees, fines, intergovernmental revenues, charges for services, special assessments and interest income. Examples include property tax, sales tax, transit occupancy tax (TOT), parking fines and business tax. These are generally all sources dependent on the health of the economy and local businesses.

Special Fund: This is to account for revenues derived from specific taxes, fees, governmental grants or other revenue sources that are designated to finance particular functions and activities of the city. For example, the Specific Parking Revenue Fund (SPRF) accounts for all monies collected from parking meters and is governed by ordinance for use. However, the City Council does have the ability to suspend ordinances to drive some of these special funds like SPRF into the General Fund.

Reserve Fund: This is an account in which unrestricted cash is set aside outside the budget for unforeseen expenditures and emergencies. This year, due to COVID-19, the City will use reserve funds to cover the revenue shortfall, and the Reserve Fund will be depleted from $383 million to $99 million. The Budget & Finance Committee has committed to rebuilding the Reserve Fund as a top priority for the city's fiscal health.

Budget Stabilization Fund: This establishes a method to prevent overspending during prosperous years and to provide resources to help maintain service levels during difficult years. It is comprised of excess revenue from seven economy-sensitive taxes such as property tax, sales tax, business tax etc.

What is LAPD's budget?
$1.857 billion -- direct costs which includes salaries, expenses and equipment
There are other related and indirect costs -- including pensions, healthcare benefits and liability claims -- which are additional obligations to the police department and not reflected in the $1.8 billion LAPD budget and come from other funds in the city budget. These costs cannot be changed easily and would include contract negotiations. With these costs, the total budget is $3.15 billion.

What is next for the FY 2020-2021 budget?
The City Council made clear that the FY 20-21 budget will be continuously reviewed and revised due to the impacts of COVID-19 and many unknowns, including:

How can money be reallocated?
There has been discussion on reallocation of money and debate on LAPD's budget versus funding more social services. For this debate it is important to note that in Los Angeles, we have the City and County and each governs various issues. For example, the City has LAPD, but the County has Department of Mental Health and the Sheriff's Department, and LAUSD is another stand-alone entity with its own governance and funding. We raise this to note the complexity in comparing funding allocations without looking at the entire region and the various jurisdictions.

What is CCA's role in the budget?
CCA will continue to closely monitor the budget and work to ensure that the cuts that are made to various departments do not have an outsized impact on DTLA. We are excited to see the increased interest in the budget and hope that this attention continues. We believe increased interest in the budget will lead to greater accountability and transparency in our government and know that benefits our city. Please let us know if you have ideas, questions or concerns, and we look forward to ongoing discussions regarding the role of the budget in shaping our city's future.

Go back | Show other stories
News